I would not discover America when I will say, that I had a flight from Warsaw to NYC and just lost luggage. And it is almost true, but not if I waited for two weeks.

Have you ever heard about the airlines which send your lost luggage after two weeks? Honestly, not. They usually do that in 2-3 days and they pay for it! Let me then share with you my story.

I always like to be prepared for everything. When I and my boyfriend were flying even to Marrocco we decided to split our clothes into two different bags in order to have some of them when one of our bags will be gone. Yes, it was, of course, my idea! When I was flying to New York city I couldn’t do that, because I was packing alone. So I packed myself in one huge luggage.

Everything was perfect. I was so excited about that trip. Couldn’t sleep, couldn’t eat. The only thing which I care about was dreaming about being on the plane to my dream country. I met a guy at the airport because we were flying together two flights. We were almost late for the plane in Belgium (too much excited to take care of the gate at the airport and departure time), but we made it.

We were sitting for about two hours on the plane at the airport! Tired, hungry, but still excited! We were watching movies, talking and wondering what is happening. We even were joking that maybe our bags will be lost.

And then the plane started… The flight was long, but the thoughts that we are going to land in New York City made me feel amazing.

And then we landed. Feeling that I am on the other side of the ocean was totally incredible. I was so happy!

But. Unfortunately, we got the information that our luggages were lost… BOTH OF US. Can you even imagine how I and my friend were surprised? How is that possible?

HIS AND MINE. TOGETHER WE LOST LUGGAGES.

Did we seriously lost luggages? NO.

Not that flight? NO.

„The luckiest” two people from the plane? NO.

And then, someone from the same plane came to me and said that the plane came without any bags... How crazy is that?

But not only what surprised us. We had to survive at the summer camp for kinds for two weeks WITHOUT ANY CLOTHES AND OUR STUFF…

Do you know what?

Well… If you are the airport employee or even chief of them… Give them more money for they work because this was their revenge for that. And I had to pay for that.

But we were in AMERICA anyway.

This site uses Akismet to reduce spam. Learn how your comment data is processed. 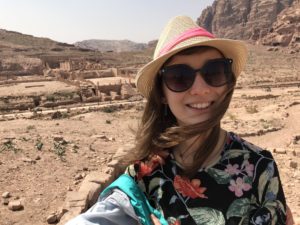